In line to be a middle income country Bangladesh has a vision to boost the electricity generation capacity up to 24,000 MW by 2021. A decade ago only 50 per cent of Bangladeshis had access to electricity but today more than 80 per cent have it, underlining the impressive progress made by the government of Bangladesh in providing power to all its citizens, which it aims to do by 2021. As a result of this successful implementation, in the last 8 years, and especially since 2014, new records have been set in terms of power generation, infrastructure development, transmission and distribution line expansion, ensuring access to electricity, exploring and using a range of resources, alternative channels and new innovations. If we look at the current energy mix (as of Jan 2018), 72 per cent is coming from gas-based power plant which is a major drawback right now.

Natural Gas production is now passing a tough time resulting in a huge shortage both in industrial and domestic consumption. Uninterrupted gas supply is a must for the power plants to remain active in order to reduce the supply-demand gap. However, gas shortage is a buzzing issue, as the government could not find any new gas field in the last decade except expanding the existing fields. According to power-cell, the think tank of power sector, Bangladesh’s energy mix will experience a major shift from gas to coal and nuclear. In the meantime, the government is weighing the feasibility to import electricity from our neighboring countries such as India, Nepal, Bhutan and Myanmar. As of today, Bangladesh imports 1160MW of electricity from India as we have a proven reserve of only 16 TCF which will exhaust in next ten years. Energy diversification is the next big challenge in the competitive landscape for Bangladesh to become the Asian tiger. So the following table will show how the gas shortage can affect our economic growth, and why it is important to look for a feasible solution to power trade in the south Asian region. 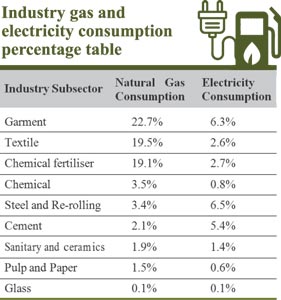 The Private sector owns close to 45 per cent of the energy mix in the currently scenario and power import from India holds the third position in it, started from 2013 with a bilateral MoU between Bangladesh and India. State minister for Power, Energy, and Mineral Resources Nasrul Hamid says, “Since the scenario of the global energy sector is changing, Bangladesh needs to ensure energy security amid its limited resources”. The probable power generation can meet the base demand both in the northern and southern regions of Bangladesh, also the probable locations are finalized to set up the transmission lines in several districts. At present 600MW of power is coming through the Bheramara-Baharampur interconnection back-to-back HVDC line (phase 1). The transmission line is 115 KM long, where 85 KM is in Indian part and 30 KM is in Bangladesh part. Phase 2 is in the planning stage, where 500MW more of power will be added to this line. The state-owned Power Grid Company of Bangladesh Ltd (PGCB) is currently building this second such sub-station at the same site. 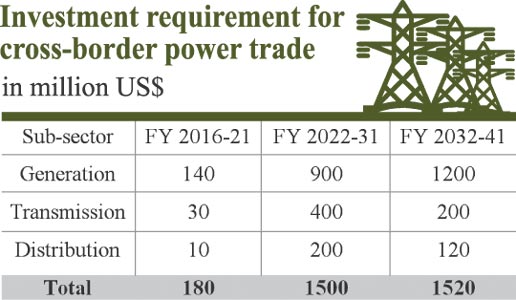 Planned projects in pipeline under cross-border power trade: Currently Bangladesh government is considering some potential candidates and companies. First, Indian Meghalaya state is sorted for a potential hydro-power plant project. The state has 2000m of hilly area adjacent to the northeast part of Bangladesh, but the new transmission line for the interconnection will be difficult due to geographical factors. Second, Indian Tripura state. Recently large-scale natural gas has been discovered in Tripura, which is also adjacent to east Bangladesh, Pallantana gas power project is planned to generate 750MW but considering the power shortage in the home country, India will consume the majority of it. Third, Indian Assam state. there is potential for setting up coal and hydro-power plants, but a long transmission line needs to be built in order to import power through our national grid. Forth, Bhutan and Nepal, as these high altitude countries have huge potential to generate hydro-power. Several proposals are in the planning stage to go for possible collaboration. Fifth, Myanmar can be an option, but the initial diplomatic talk has not started yet due to the Rohingya crisis. 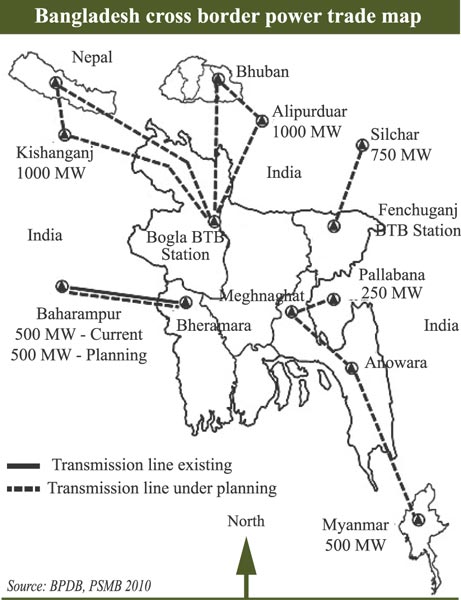 South Asian countries leaders should cooperate more in cross-border power trade by utilizing the unused natural resources and strengthen bilateral relation which will not only boost the economy of the whole region but also improve the people’s standard of living. Industrial diversification and advancement are essential in order to achieve further economic development in Bangladesh. Tawfiq-e-Elahi Chowdhury, the prime minister’s adviser on power, energy and mineral resources, invited foreign entrepreneurs to invest in our power projects in an event last year. Uninterrupted power supply becomes the necessity for our booming economy. But cross-border trade needs huge investment to import from Bhutan and Nepal. Bhutan and Nepal are very small countries, their economies are highly depended on tourism only, in that case foreign direct investment will be needed to finance these mega power projects. Additionally, we need to build approximately 1500KM long transmission lines to access electricity from these power plants. The biggest drawback or challenge is that the maximum portion of transmission lines will pass through India. So, eventually Bangladesh needs to start the diplomatic negotiation to initiate these mega projects. On the other hand, proper framework is needed for a smooth investment, otherwise the power projects will remain only in blue print in our master plan.

As seen on Financial Express.

COVID 19: What does it mean for the Rohingya Refugees

Fault-lines in the economy: Taking lessons from the COVID-19 pandemic to tackle future crises